We talk a lot about wine and wine + food pairings on Urban Bliss Life, but we haven’t really discussed beer pairings. Did you know that, like wine, certain beers help bring out the different flavors in food and complement specific dishes?

I’m no expert in the beer pairing world (or any world really, which is why I experience these things so I can share what I learn with all of you!). Hence, I was very happy to be invited to a Brewery Dinner at Whole Foods Market at the Pearl District location in Portland, Oregon. I was eager to learn more about what types of beers paired well with certain foods — and to maybe find some new fave local beers from featured brewery Fort George Brewery as well.

The dinner was held in The Salud Room, which hosts many cooking classes and other events that are open to the public. We were greeted by a beautifully warm tablescape, dotted fittingly with beer bottle vases containing local wildflowers. 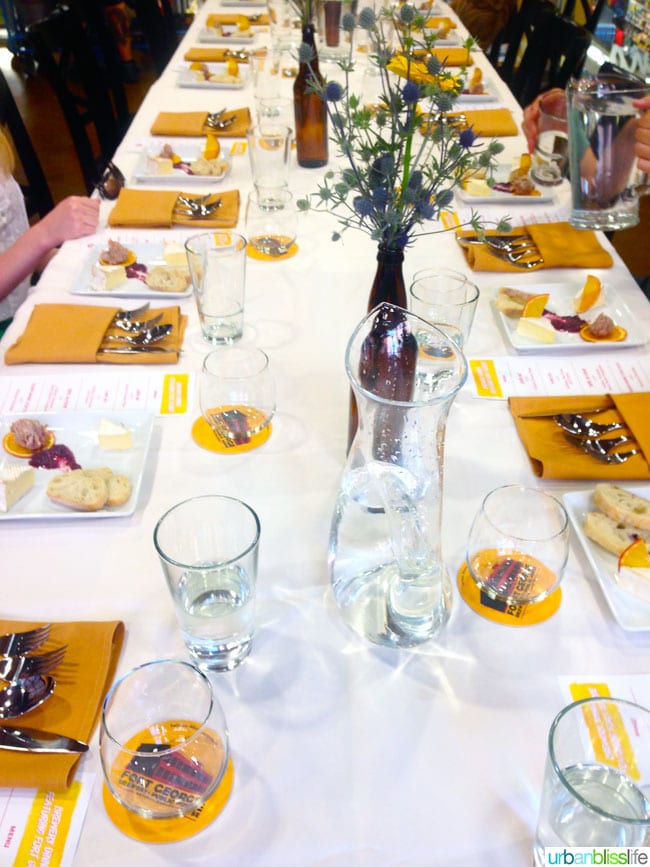 I loved the mustard-colored linens at place setting. They seemed so perfect for a beer event! 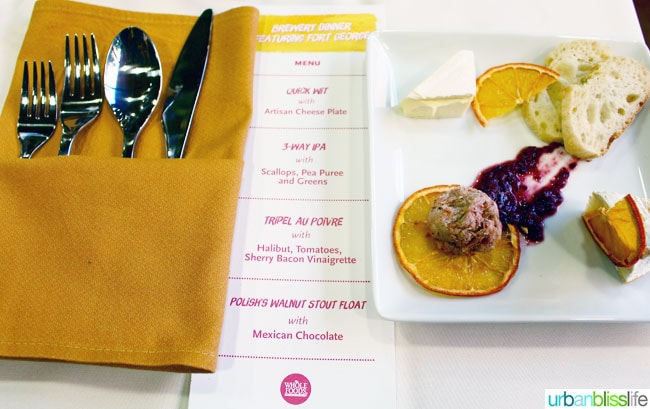 I stared down a menu of the four-course pairings that lie ahead and prepared to dive right in. 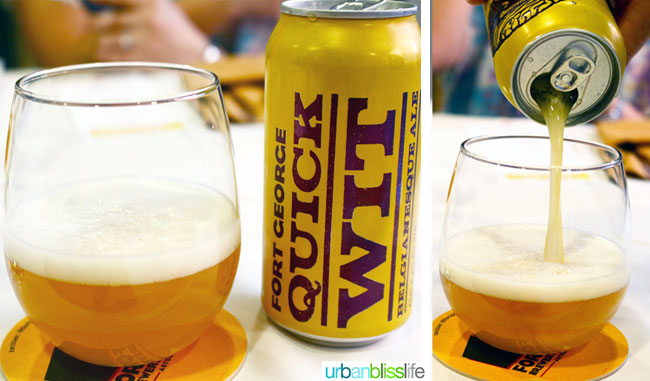 Quick Wit was an excellent choice for our first course. This approachable, Belgian Wheat Beer has light floral notes and is a great intro beer, I think, for folks who might not necessarily be the type to instinctively order a beer with dinner.

This beer was nice and mild, which is why I think it paired well with the cheese plate: it wasn’t so strong as to interfere with the different cheeses but rather acted as a palate primer to allow one to fully enjoy the flavors of each cheese. 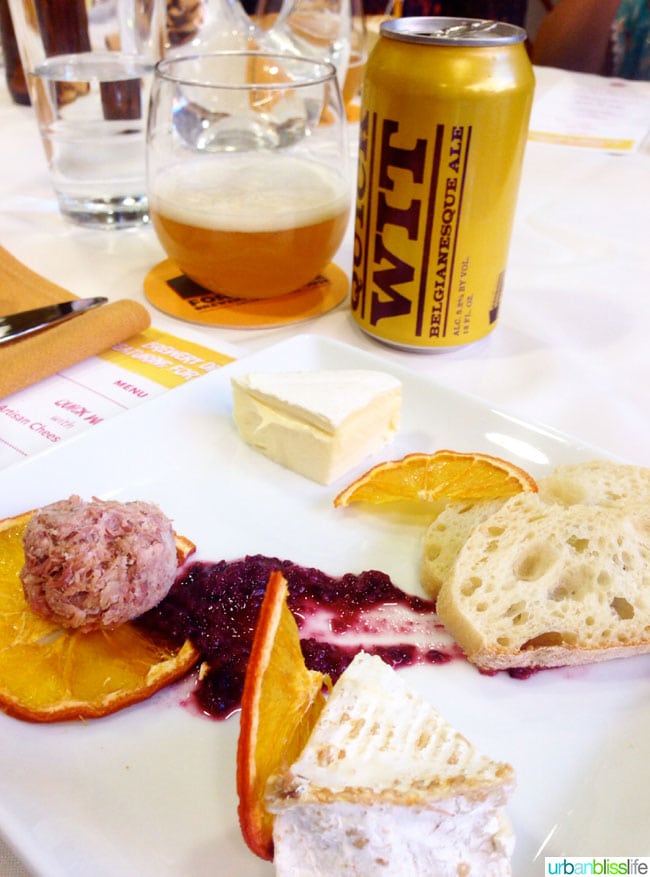 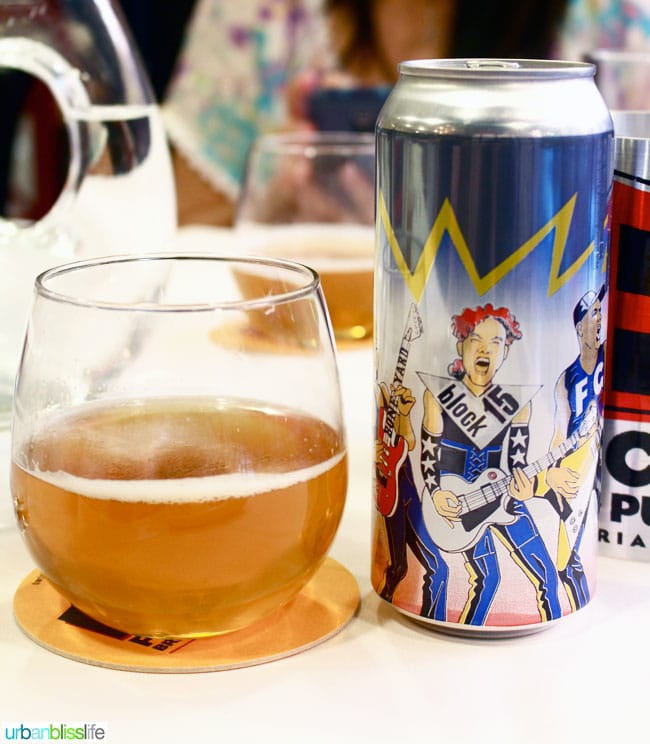 3-Way IPA is a collaboration between Fort George, Block 15, and Boneyard (hence, that’s where the “3-Way”comes from — get your head out of the gutters, people), and it’s Fort George Brewery’s #1 selling beer.

3-Way IPA is a dry beer made with mostly Mosaic hops. It is full of citrus flavor, which I thought made it pair well with the scallops. I usually go for a dry, slightly citrusy wine with seafood dishes, so why not aim for the same with beer?

Chef Ryan of the Pearl District Whole Foods Market did such a masterful job in searing the scallops and plating the beet greens beautifully. Loved this dish! 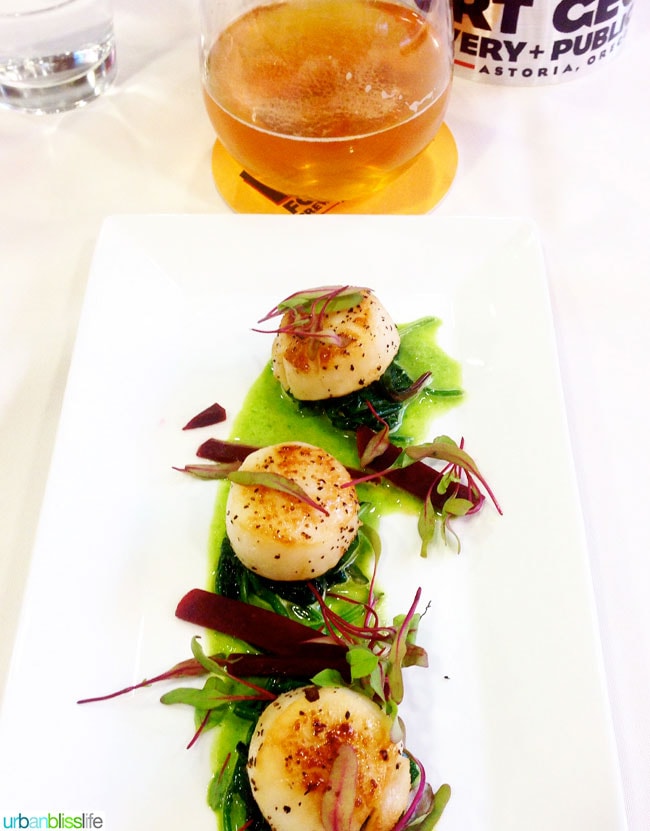 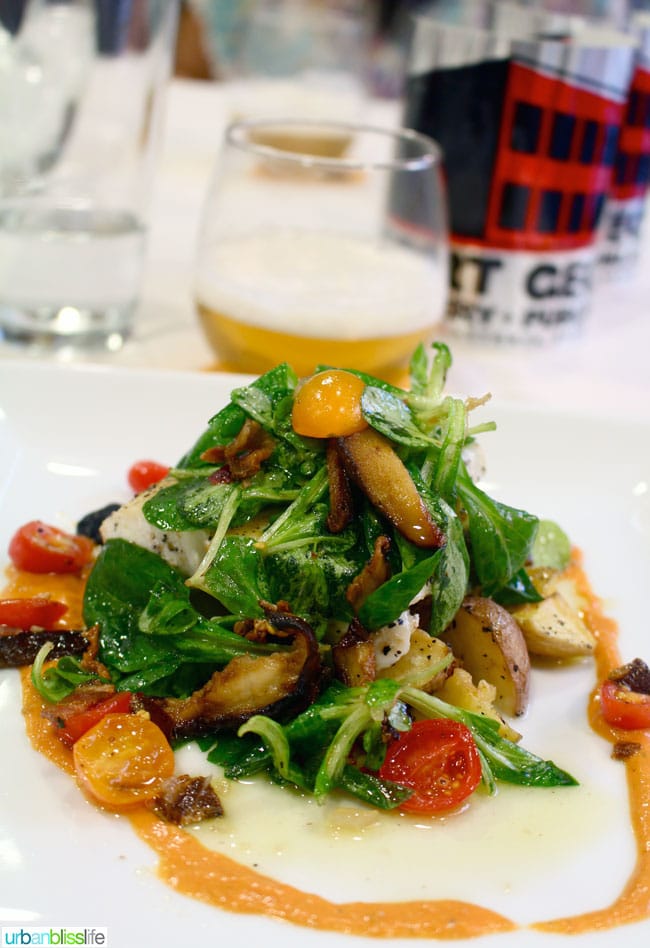 Tripel Au Poivre is a newer beer addition to the Fort George Brewery family of beers. At 7.2%, it is a medium-bodied beer with hints of cracked peppercorns. It’s not too sweet, which makes it a nice pairing with this salad.

The halibut salad, by the way, was my favorite dish of the night. The halibut was pan-seared just right, and I loved the addition of caramelized local crimini and shitake mushrooms. The roasted tomatoes were the perfect bites of summer.

Finally, we have dessert. We were poured a glass of Polish’s Walnut Stout and instructed to pour it over the Mexican Chocolate in mason jars. 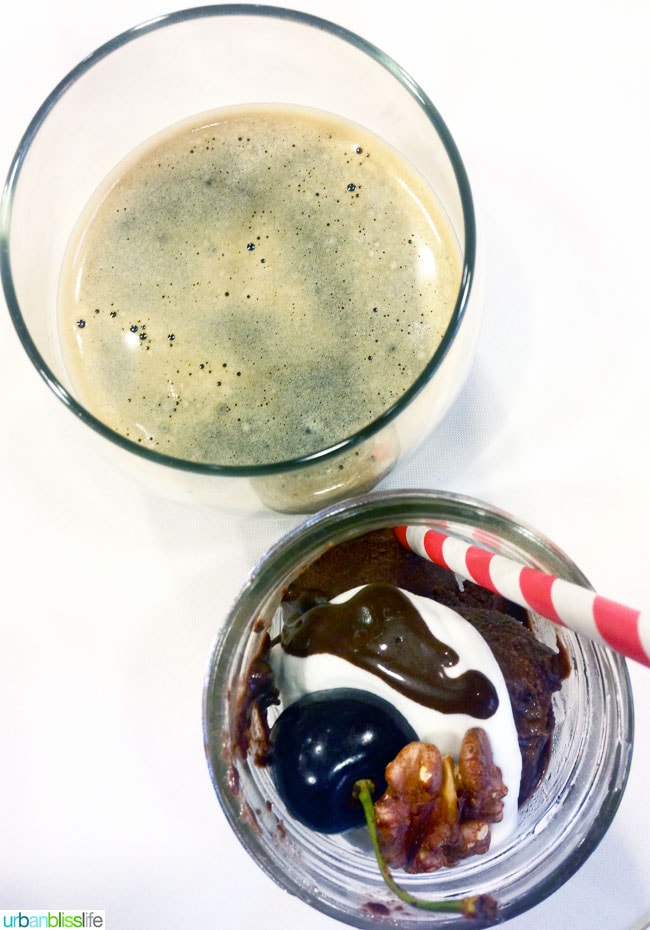 I’d like to take this opportunity to once again apologize to the great folks at Whole Foods for making a mess of the tablecloth at this point. The photo above is before I attempted to pour the beer over the chocolate AND take a photo at the same time. Most of the beer made it into the jar.

Dessert beer is not admittedly my favorite type of beer, much like traditional dessert wine is not my favorite type of wine. But this dark beer was oozing with walnut flavors and honey, and it made a decadent float when poured over the spiced chocolate, chocolate cherry ice cream, and honey coconut whipped cream.


My takeaway from this brewery dinner was to pair beer with dishes just as I would pair wines. Light beers go well with spicy Asian dishes, and darker stouts and porters go well with wild game and rich chocolates. In the end, I always just go with my gut. Try a sip of beer, then take a bite of food. Do they go well together? What makes them NOT pair well together? Sometimes it’s a tiny addition to the beer that suddenly stands out when paired with a certain dish. And like wine pairings, there are no absolute hard and fast rules when it comes to pairing beer with food.

It would be fun to experiment with beer tastings more. Luckily, Whole Foods Market in Portland is hosting another Brewery Dinner coming up!

WFM Brewery Dinner
August 21, 2014
6:30 pm
Featured local brewery: Hopworks Urban Brewery.
All proceeds will be donated to the Whole Kids Foundation
Details are still being hammered out as of press time, but the brewery dinner I attended was $25 per person.

More brewery dinners may be planned across the country. I know the Dallas store has held them in the past. Be sure to check your local Whole Foods Market Event Calendar for the next Brewery Dinner in your city!

Are you a beer drinker? What’s your favorite type of beer, and what dish or type of food would you pair it with?

Disclosure: I was given a complementary ticket to attend the Whole Foods Market Brewery Dinner featured in this post. As always, all opinions and photos are my own. I only write about products, services, events, and experiences that I support and believe you, my dear reader, would enjoy learning about as well. 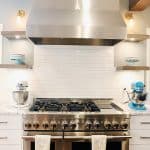